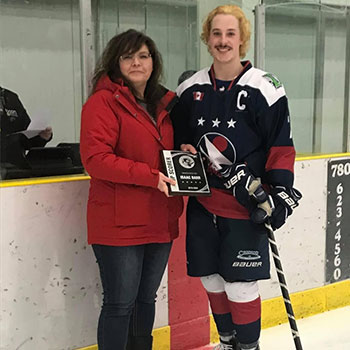 Lisa Davies has done it all as a volunteer over the past 22 years.

Whether it’s being a billet mom, volunteering at the Canada Winter Games or at a provincial championship - both around St. Paul and with Hockey Alberta - Lisa is well-known around the community and the region.

At the provincial level with Hockey Alberta, Lisa serves as the Minor Administration committee member for the Northeast Region. In that role, she assists minor hockey associations with registration processes, completes team and player approvals, and player transfers in HCR.

She also has been involved with junior hockey. Previously, she served as president of the St. Paul Canadiens Junior B team for eight seasons, and now she is the vice president in charge of discipline the North Eastern Alberta Junior B Hockey League (NEAJBHL).

Lisa said the sense of community she gains, and shares through volunteering is what keeps her going.

"You get to meet new people, you get to network, and you get to learn new skills," she said. "It makes me happy.”

Although she couldn’t pin down just one, she said her favourite memories come from events like the Canada Winter Games, World Junior A Challenge, and Hockey Alberta Provincial Championships.

“You know they’re all having fun, they’re excited to be there, and they have reached their goal," she said. "So it always fun to see those happy faces.”

Lisa also volunteers outside of hockey, helping out with minor baseball, Skate Alberta and a variety of school programs.

It is the lifelong connection to the players in the game that keeps Lisa involved. 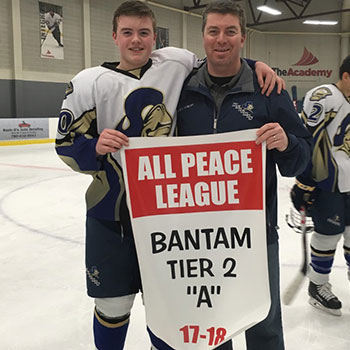 A dedicated volunteer, Tom West has served the community of Grande Prairie for more than a decade.

Tom began coaching in Fort St. John in 1999, but, after three years, went on hiatus once he and his wife started a family.

He re-joined the coaching world in 2010 in Grande Prairie at just about every level, and also served as the Manager for the Midget U16 AAA team.

Tom has been on the Board of Directors for Grande Prairie Minor Hockey since 2015, and, on top of his coaching and board positions, Tom also gets some extra ice time in as an official.

He began officiating in 2014, and since then, has worked every level of hockey up to Junior A/B, and Senior in the Grande Prairie area.

Tom said no matter what role he is serving, he makes sure to bring a positive attitude, and dedicate as much of his time and possible to the organization.

"Whether it’s a development team where kids are just learning to skate, or a AA or AAA team that is well on their way, to have the right attitude and kind of re-focus and bring it down to their level whatever age or whatever level that is, and work with them,” he said.

For Tom, volunteering is his favourite way to give back to the community.

"I know a lot of people say that, but for me, I enjoy seeing the operation and opportunity to guide and grow," he said. "Whether it’s someone my own age or in hockey, usually someone younger, watching them grow and develop as a person and a player and expand their knowledge and improve their skill set."

Whether they’re giving their time to international events, national championships, or minor hockey, volunteering isn’t just what Michelle Skilnick and her parents, Steve and Janet Fleiming, do. It’s who they are.

A volunteer with Hockey Alberta’s Team Alberta programs for over a decade, Brenda Dyck’s number one goal is, and has always been to help bring out the best in every single athlete she comes across. 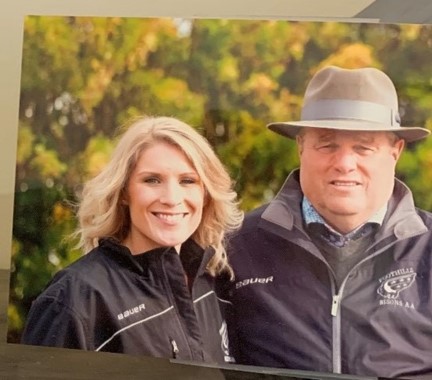 As a former professional hockey player, Tom O’Toole knows the importance of giving back to the game, and has been doing just that for over 40 years.

Once his pro career ended, Tom wanted to stay connected to the game, and to give back and share his knowledge about the game.

“One of the (reasons) was to help kids understand the game,” he said. “And to me, it wasn’t about the game in itself, I just wanted to share some of my ideas, and I had a lot of people help me along the way so I figured I owed that to the kids to teach (them).”

Tom’s coaching career began by running goalie clinics in Okotoks on a volunteer basis. He also has served as an Assistant Coach at the Midget AA and AAA, and Bantam AA and AAA levels throughout Southern Alberta, along with Peewee and Bantam teams on the female side. He currently serves as the goalie coach for the U16 AAA team in Okotoks.

The passion for volunteering throughout the hockey community is common in the O’Toole family; two of Tom’s daughters have a key roles in Minor Hockey in Alberta, one is a coach and the other is a physical trainer.

“If anyone is looking to do it, any aspiration; if you want to coach try to coach, it’s really rewarding,” Tom said. 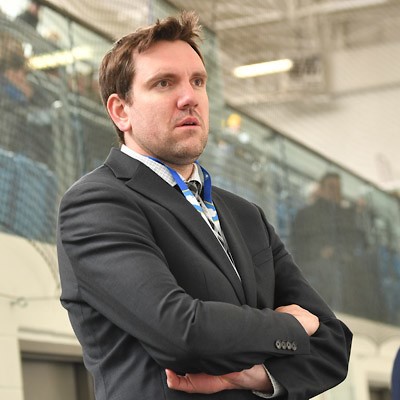 Chris Williams has volunteered with Okotoks Minor Hockey Association as a coach for nearly a decade.

His coaching career began in 2004 as an assistant coach with the Timbits program. Chris then took a 10-year hiatus to establish his career and family, but his passion for the game brought him back to coaching in 2014.

Chris believes in giving back to the community.

“I’m a huge believer that young kids need guidance, not just from parents or teachers, but they need it from coaches and other mentors,” he said. “It’s kind of an honour to be one of those people who get to jump in.”

Chris is also a high school teacher in Okotoks, and said while there are many similarities between coaching and teaching, they are definitely not the same.

“There’s Coach Chris at the rink and there is Mr. Williams at school. I have to act professionally in both settings but there’s a difference,” he said. “You’re a bit looser at the rink, you can be a bit more buddy-buddy, but while you’re at school, you’re a professional. It’s what you do, but it really helps you see the different sides of the kids.” 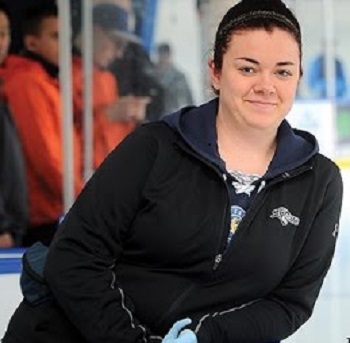 Although hockey is already a full-time job for Karyn Fanstone, she still takes the time to give back to the game any chance she can get.

Since moving to Alberta from Manitoba in 2015, Karyn has been heavily involved in hockey in the province as both an Athletic Therapist and Equipment Manager. She is currently the Athletic Therapist for the Brooks Bandits of the Alberta Junior Hockey League, a position she’s held since 2017, and previously worked for the Drayton Valley Thunder and the Bonnyville Pontiacs.

Karyn has also been an avid volunteer with Hockey Alberta since 2015, having been a part of the Team Alberta program in just about every capacity. She’s served as an Athletic Therapist at all three Team Alberta events: the Alberta Cup, Alberta Challenge, and Prospects Cup, as well as with Team Alberta U16 Male on numerous occasions. Her work with the U16 program includes back-to-back WHL Cup Championships in 2015 and 2016, and a bronze medal the 2019 Canada Winter Games in Red Deer.

She has also volunteered at the Team Alberta U18 Female Summer Camp, leaving serving as Athletic Therapist for a competition on the female side as the only checkmark missing from Karyn’s Team Alberta bucket list.

“I thought it would be a good opportunity to kind of get my name out with hockey (in Alberta),” she said. “Ever since my first camp, my hockey family has grown exponentially, and getting to work with kids, and be a part of their process as they develop and accomplish their goals, as cheesy as it sounds, it’s an indescribable feeling.”

Karyn said even though her initial reason for volunteering was to network and get a feel for the game in Alberta, it’s become so much more than that for her.

“Volunteering is the opportunity to do what I absolutely love, and use that to help others reach their goals,” said Karyn. “I had lots people when I was up-and-coming and still in school who took that extra time to mentor me to make sure I felt comfortable with what I was doing and learning, and to be able to be that person for other people is my goal.” 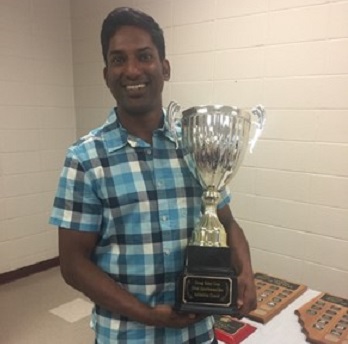 Anthony (Tony) Jacobsen has been a committed volunteer in Grande Prairie since 2011.

Tony has coached all levels of minor hockey over the last 10 years, from U7 to U15. The relationships and connections that Tony has built are what he enjoys most about coaching.

The Jacobsens are a big hockey family with three kids playing with Grande Prairie Minor Hockey and Deunne, Tony’s wife, coaching on the female side. During his time coaching, Tony is proud to have been able to see his players grow and develop.

“You know what’s really rewarding? Recently I was on the ice with the U15 group. These are kids that are my kid’s age and I coached them back in novice, and when I watch them skate around, all of them can skate better than I can and all of them are playing heads up high-level hockey. That’s really cool when you had a little tiny hand in that,” said Tony.

Tony won the Grande Prairie Minor Hockey Association (GPMHA) Recreation Coach of the Year in 2016 and continues to serve the community as a coach in Grande Prairie.