Female Hockey Day is a Hockey Alberta initiative aimed at bringing female players, parents, coaches, and supporters together for the development, growth, and celebration of the game. Beginning in 2018, Female Hockey Day has made stops in Red Deer, Lethbridge, Lloydminster and was held virtually via Zoom in 2021.

2023 Female Hockey Day presented by ATB Financial is coming to Calgary! Girls Hockey Calgary will host the celebration of female hockey on January 7 at the Max Bell Centre.

For those interested in hosting a Female Hockey Day event in their community, the Hockey Alberta Foundation is offering $1,000 Every Kid Every Community Grants.

Apply for an Every Kid Every Community Grant >

Female Hockey Day has something for everyone!

An on-ice goalie development session will be held for female goaltenders. A variety of skills and fundamentals will be covered by some of Alberta’s best goaltending instructors.

** Please note that all goalies must be born in 2014 or earlier.

If you do not have goaltender gear please contact [email protected]

There will be a Try Hockey session offered for youth females who are looking to try hockey for the first time.

The Calgary Flames Sports Bank will be providing equipment to those that need it. Should you require gear, please contact them at (403) 202-0251 or at [email protected] to set up a gear fitting. Please note that in order to ensure you have gear in time for the event, you must make contact with them on or before Wednesday, January 5, 2023. When contacting them, please let the administrator know you will be part of the Alberta Female Hockey Day Try Hockey Program.

There will be an introduction to officiating course for females who are looking to get into officiating. Upon completion of this course, you will be certified to officiate.

**Please note that you must be age 12 or above to officiate in rural areas, and 13 or above in urban areas.

There will be two options for females looking to get started within the coaching side of the sport. This introductory course is free of charge and open to all ages, so whether you are a mom who wants to get involved, or an older player who is looking at transitioning to a different aspect of the game - this one is for you!

The Calgary Fire White will take on the Airdrie Lightning of the Alberta Female Hockey League’s U18 AA division in an afternoon matinee. Everyone is invited to take in the action!

Girls Hockey Calgary U7 team will scrimmage during the first intermission, while members of the Professional Women’s Hockey Players Association (PWHPA) will host a meet and greet, giving the girls a chance to meet their idols.

Girls Hockey Calgary talent will be on display with the U11 and U13 Skills Competition. U11 Teal, U11 Red, U13 Silver and U13 Spark will showcase their skills, with the demonstrations being done by the members of the PWHPA.

The 2022 Female Hockey Day presented by ATB Financial, was hosted Saturday, January 29 in Lloydminster. Female Hockey Day featured on and off-ice development sessions for players and parents - all to celebrate female hockey. All ages and skill levels were welcome to join.

Player Development sessions took place throughout Female Hockey Day, that included on and off-ice instruction for current female players at all levels, from U7 to U18.

An on-ice goalie development session was held for female goaltenders of all ages. A variety of skills and fundamentals were covered by some of Alberta’s best goaltending instructors.

A Try Hockey session was offered for youth females who were looking to play hockey for the first time.

The AFHL is home to 30 teams at the U18 AAA, U18 AA, and U15 AA levels, providing a competitive platform for young aspiring female athletes to enhance their skills. A collection of 12 host associations around the province are committed to the growth and development of AAA and AA female hockey.

Once finished with the Steelers, Bella moved on to play NCAA Division I for Union College in New York.

Growing up in Irma, most kids played hockey and baseball, and her older siblings played hockey, so Bella was drawn to the game for as long as she can remember. There have been many influences for Bella in her hockey career. Growing up, she loved watching clips of NHL goalies such as Grant Fuhr, Dwayne Roloson, and Martin Brodeur. Closer to home, her parents made sure that she had every opportunity to play the game. When she was younger, a close friend passed away, and his memory has given her motivation to play ever since. Lastly, he good friend Candi has been a big influence by encouraging, supporting, and cheering on Bella at her highest and lowest, including transitioning out of playing and into coaching.

"Minor hockey gave me the opportunity to fall in love with the game of hockey. I quickly learned that if I worked hard I could earn my place to play the game," said Bella. "However, growing up in hockey taught me more than what I learned on ice. It taught me to work with a team, to always be thankful for the opportunities you are given, to respect everyone around you, to play and live like everyday might be your last, and also how to be a leader and a role model."

One highlight from her playing career, was when Bella backstopped Team Alberta to a gold medal at the 2019 Canada Winter Games in Red Deer.

Her advice to young females in the game is to never lose the fun in hockey. It is a privilege to play the game, so always have fun and give it your best. Never let hockey become an obligation. 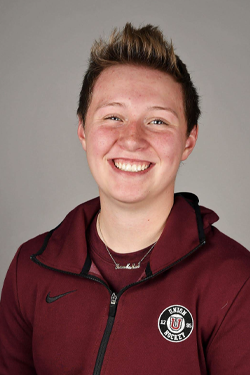 Alex grew up playing minor hockey in Lloydminster. She began playing on the female side as an underage player with the U15 AAA Icecats, before moving on to play three years with the Northern Alberta Xtreme of the CSSHL and capping off her minor hockey career playing for the U18 AAA Lloydminster PWM Steelers.

After minor hockey, Alex moved on to play in U Sports with the Mount Royal University Cougars in Calgary, where she is still currently playing.

The biggest influence of Alex’s hockey career has been her family. Playing hockey came naturally within her household, as her older brother played and her parents were big supporters. Whether it was driving to early morning practices, talking with he after games, or allowing her to move away at age 15 to pursue her hockey dreams, Alex’s parents impacted her and her hockey career in the best way possible.

"Being a female hockey player has presented me with many different opportunities. Through hockey, I have had the ability to volunteer at different events, organizations, and communities. Not only volunteer experience, being a hockey player comes with many positive connotations," said Alex. "Mentioning my experience within the sport has aided me in getting a job as the qualities that I have as a teammate are transferable to the work force. The work ethic, team work, and mental toughness I have learned throughout the sport will help me as I move beyond hockey."

Alex represented Team Alberta on two occasions, including winning a gold medal at the 2019 Canada Winter Games, and being named Captain of the team that competed at the 2019 National U18 Women’s National Championship.

The one piece of advice that she would give to young players today is to just have fun with it. At the end of the day hockey is a sport that is meant to be enjoyed. Once you start taking the game too seriously and are too hard on yourself, you wont succeed. I believe that the most successful players are the ones that have fun while practicing, working out, and playing. 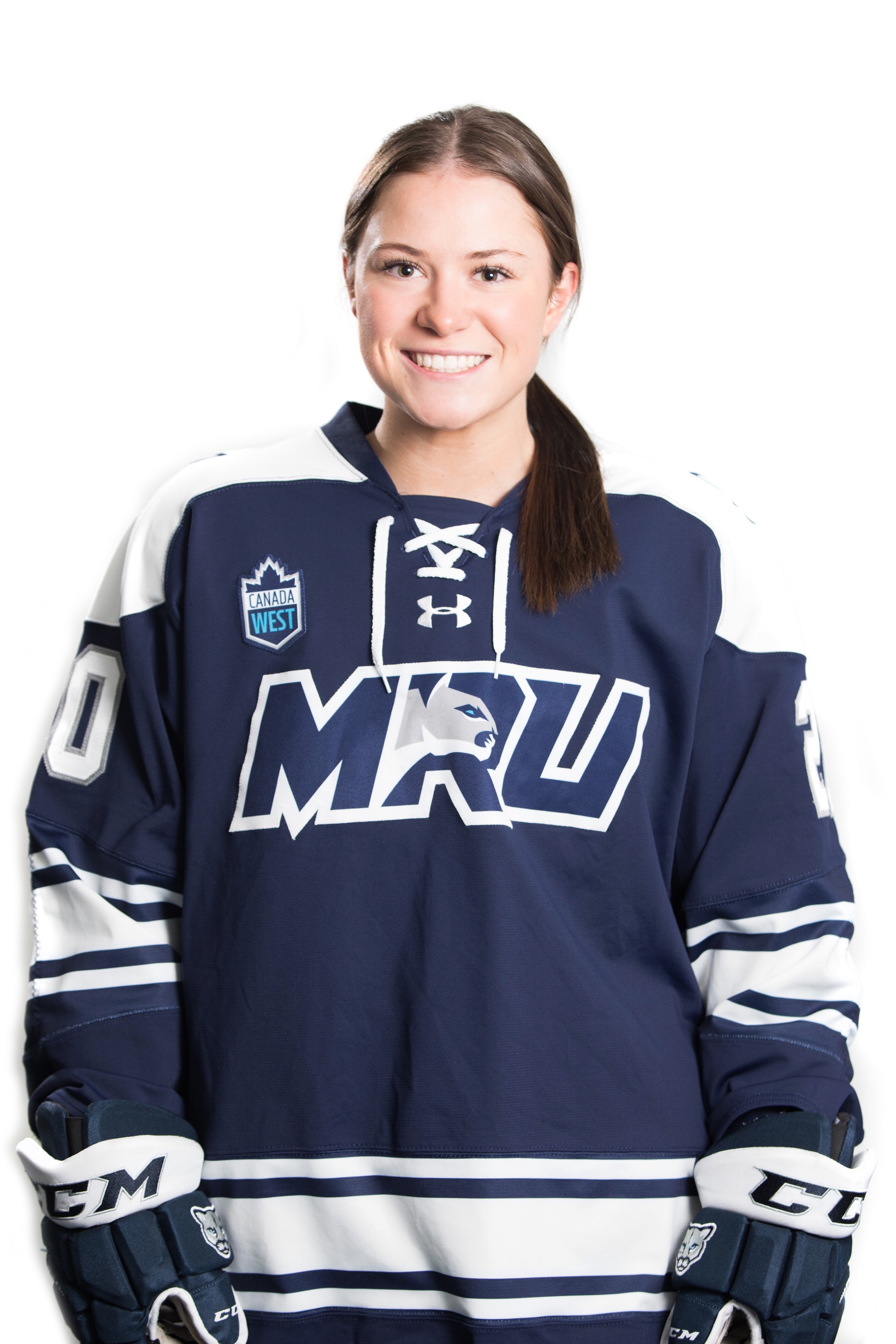 Beginning her minor hockey journey in Provost until her first U15 year before switching over to play U15 AAA and U18 AAA in Lloydminster. She finished off her minor hockey career by moving out to join the Warner Hockey Academy in the Junior Women’s Hockey League.

The decision on where to play after minor hockey was not as easy one for Kennedy, but ultimately she wanted to be close to home and have her family in the stands, which is why she elected to play at the University of Alberta. After five years with the Pandas, she was drafted by the Buffalo Beauts of the National Women’s Hockey League, where she is she is still playing this season.

Kennedy fell in love with the game at a young age thanks to the influence of her entire family. Throughout her journey from Provost to Lloydminster, Edmonton, and now Buffalo, her parents, brothers, and grandpa have always made trips to watch her play and support her.

"The hockey world is a very small world and there are a lot of connections that can be made," said Kennedy. "Once my career is over, I am hoping to stay involved in the game and get into coaching. I want to give back to the game as much as I can and help young female athletes achieve their goals."

The biggest piece of advice that she can give to young players is to set the bar high. There is no such thing as setting “too high of goals.” It is amazing what you can accomplish with hard work and determination both on and off the ice. You will certainly face obstacles, but it is important to remember why you play the game and that a goal isn’t meant to be easily achieved. 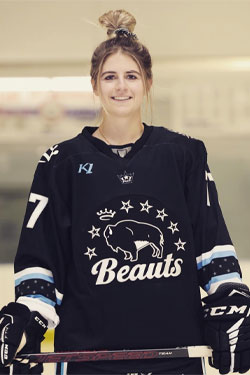 Free Skate with the Steelers

2021 Female Hockey Day was fuelled by Gatorade, and presented by ATB Financial. Nearly 300 female hockey players, parents, coaches, and supporters gathered on Zoom to engage and learn from accomplished speakers and panelists. All sessions were recorded and are available to watch below.

GSSI is committed to helping all athletes optimize their health and performance through research and education in hydration and nutrition science, for more information on Gatorade and the GSSI please click here.

An elite hockey development company that has served over 1,000 athletes since 2007. From their Crash Conditioning off-season programming to in-season team training they have helped develop Minor Hockey Players to Pro Athletes in the realms of strength and conditioning. Click here to find out more.

Mental Performance Coach Perri Ford joined us and shared her insight on performing at a higher level mentally and setting goals with soul.

For more information on the Banff Yoga Festival click here.