The U11 Player Pathway is supported by the Hockey Canada Long-Term Player Development Model. This framework provides the guiding principles for age appropriate and skill specific programming for all players in Hockey Canada’s youth hockey system.

The U11 Player Pathway provides an environment that helps all players at the U11 age level (9 and 10 years old) to realize their full potential. Hockey Canada strongly believes that the needs of the player should be at the forefront of the programming. The U11 Player Pathway delivers numerous benefits to participants and their families. The benefits include:

As part of the implementation of the U11 Pathway, Hockey Alberta has decided to remove Provincial Championships from all streams (Minor and Minor Female) at the U11 division effective for 2020-21 season. This change will allow for less disruption to the end of the season’s league play, will provide more time for teams to celebrate the season with year-end tournaments, and will remove the unnecessary pressures of a "Provincial Championship" from nine and 10-year old players.

Every U11 player must have a minimum of four ice sessions (prep skates) prior to formal tryouts starting. The prep skates can be single year or combined, the recommended focus is:

1. The prep skates are an opportunity for first-year U11 players to become familiar with the rule changes and larger ice surface.

2. The prep skates ensure a player’s first experience in the new hockey season is not a formal tryout - this gives all players the opportunity to get back on the ice in a more "player‐friendly" environment.

3. The prep skates help level the playing field; not all players go to hockey schools or prep camps prior to the start of the season.

Tryouts must be a minimum of three formal ice sessions. Recommendation is one skills session, one small‐area games session and one scrimmage game session. 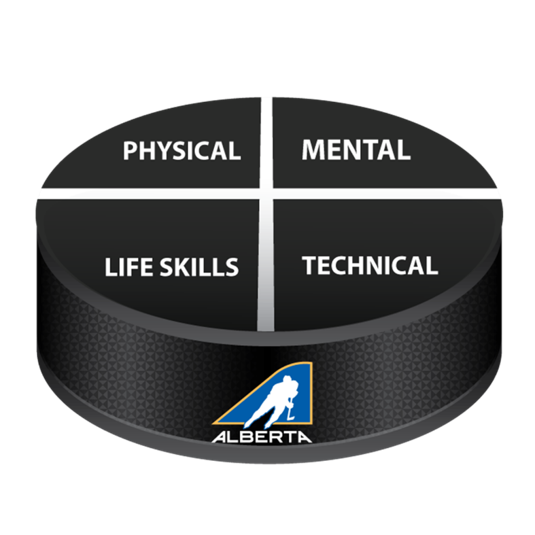 Every team must have a period of development time following team selection and prior to the regular season starting. Skills before tactics, tactics before systems.

A GAME BY THE NUMBERS

The period from the first regular season game to the start of playoffs.

Playoffs must be tournament‐style format versus elimination rounds.

The period of time from the end of the playoffs to the start of the next preparation phase.