CAMROSE - Hockey Alberta’s summer provincial development and evaluation camps begin this week in Camrose and run throughout the month of July.

Some of Alberta’s best hockey talent will be on display at these camps, with more than 200 athletes take part in a variety of on-ice and off-ice development opportunities. All camps are open to the public and take place at the Border Paving Arena at the Camrose Recreation Centre.

The U16 Female Provincial Camp is the second stage of development and identification process that feeds into the Team Alberta U18 Female program. The top 60 players participate in on and off-ice training and classroom sessions, and compete in game environments.

The U16 Male Provincial Camp features the top 80 U16 athletes identified by Hockey Alberta working out in off-ice sessions, as well as on-ice games and practices. From Provincial Camp, a short list will be created, and players scouted with their club teams until the 20-player Team Alberta roster is named for the Western Canada U16 Challenge Cup in Calgary.

The Officials Development Camp runs in conjunction with the U16 Male summer camp, as officials work provincial camp games and receive mentoring and evaluation. This is third stage of development for officials, starting with ATB Alberta Cup zone camps, and progressing to the ATB Alberta Cup competition.

The top 46 U18 female hockey players, selected from a spring camp held in Spruce Grove, take part in a variety of games and practices. After the summer camp, players are shortlisted to continue through a fall training camp and scouting process. From there, the final 20-player Team Alberta roster will be selected for the National Women’s Under 18 Championship in Regina, Saskatchewan November 9-13.

Selected athletes receive both on and off-ice development directed by AJHL/Hockey Alberta staff, and facilitated by the High Performance I Coaching Seminar delegates. The on-ice program will consist of both practice and game sessions, and the off-ice portion will cover athleticism, mental skills and team building as well as the technical and tactical skills required to play in the Alberta Junior Hockey League.

RED DEER - In what many are calling a long over-due honour, Clare Drake is finally headed to the Hockey Hall of Fame.

Drake returned to Edmonton as a teacher, and in 1955, he joined the Golden Bears as interim Head Coach, winning his first league championship. He was named the full-time Head Coach in 1958, a post he held for 28 season, amassing 697 wins, 17 Canada West titles, and six national championships behind the bench. Popularly-known as "the dean of coaching", Drake is the only university coach to win a national championship in both hockey and football in the same year, a feat he accomplished in 1967.

In the inaugural Canada Winter Games in 1967, Drake led the Golden Bears, who represented Team Alberta, to a gold medal.

Drake also coached the Edmonton Oilers during the 1975-76 World Hockey Association season, served as an Assistant Coach with the Winnipeg Jets in 1989-90, and worked with the Dallas Stars during the 2001 Stanley Cup playoffs. Internationally, Drake was the co-coach of the 1980 Canadian Olympic Hockey team, and the mentor coach for Canada’s National Women’s Team leading up to the 1998 Winter Olympics.

Drake was inducted into the Canadian Sports Hall of Fame in 1989, the Alberta Hockey Hall of Fame in 2006, and had the University of Alberta’s hockey rink, formerly the Varsity Arena, named after him.

Brooks Bandits defenceman Cale Makar speaks to the media after being selected in the first round, fourth overall by the Colorado Avalanche (Photo credit: College Hockey Inc.)

RED DEER - It was another solid year for Albertans at the 2017 NHL Entry Draft in Chicago, including a history-making selection in the first round.

Thirteen players from Alberta were taken over the weekend, including Brooks Bandits defenceman Cale Makar, who became the highest drafted player in Alberta Junior Hockey League history when then Colorado Avalanche selected him fourth overall.

A pair of Albertan netminders also heard their names called on Saturday, as the Lethbridge Hurricane’s Stuart Skinner was selected in the third round by his hometown Edmonton Oilers, and Price Albert Raider Ian Scott was taken in the fourth round by the Toronto Maple Leafs.

A full list of Albertans drafted can be found below:

Hockey Canada announced today (Thursday) that the Brooks Bandits of the Alberta Junior Hockey League will host the 49th edition of Canada’s National Junior A Championship May 11-19, 2019 at the Centennial Regional Arena.

“Hockey Alberta is excited to have this prestigious event return to Alberta. We are always proud of how our Alberta host communities raise the bar when it comes to hosting a major event and welcoming teams from across the country,” said Rob Litwinski, CEO, Hockey Alberta. “We look forward to working with Hockey Canada and the Alberta Junior Hockey League to provide support for the Brooks Bandits and their host committee to make the 2019 RBC Cup a successful event.”

The 2019 RBC Cup will bring together the top Junior A teams from across the country, along with the host Bandits, to face off for the national championship. Historically, the event has generated more than $2 million in local economic impact, with event proceeds being directed to supporting hockey development in the community.

“We are immensely grateful to Hockey Canada for the opportunity to showcase our community’s passion for Junior A hockey on the national stage, and to the local businesses, government, and organizations that helped to support our bid and make this event possible,” said Tyler King, chair of the bid committee and Bandits communications manager. “We are already looking forward to the next two years of preparation to ensure an unforgettable national championship." 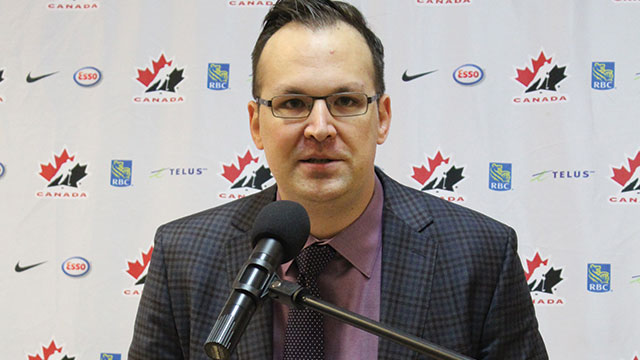 Having previously captured Canada’s National Junior A Championship in 2013 in Summerside, P.E.I., the Bandits also appeared at the RBC Cup in 2016 and 2017 and will look to carry momentum from their runner-up finish at this year’s championship in Cobourg, Ont.

Tournament ticket packages are tentatively scheduled to go on sale in May 2018 and season ticket holders will be given the first opportunity to reserve seats for the tournament.

Schedule information for the 2019 RBC Cup will be announced at a later date.

CALGARY - Thirty hockey players from Alberta are among the 197 invited to Hockey Canada’s annual National Team’s Summer Showcase in July.

RED DEER - Hockey Canada has adopted a policy requiring Initiation level hockey be played on cross-ice or half-ice surfaces. To help our Minor Hockey Associations facilitate this requirement, Hockey Alberta is providing an opportunity for MHAs to purchase ice dividers at a discounted price, if there is sufficient interest. Any MHA in Alberta is eligible to participate.

The approximate cost for the ice dividers will be:

If your MHA would like to participate, please complete the online registration form by July 5, 2017. Once the deadline passes, Hockey Alberta will decide on whether to move forward and will confirm with all MHAs who expressed interest.

To access the online submission form, or if you have any questions about the submission process or the status of your application, please contact Melissa Drake in the Hockey Alberta Office by email at [email protected] or phone 403-967-0064.

Do you have a child aged 6-10 that is ready to fall in love with hockey? Registration is now open for the 2017-18 Canadian Tire First Shift program.

The First Shift is a truly unique experience designed to help your child fall in love with hockey before you buy all the gear. The six-week learn to play program focuses on having fun while learning basic skills. Registration is just $199, which includes full head-to-toe equipment.

The First Shift will be offered in eight locations throughout Alberta in the fall, and two in the winter:

To register for a First Shift program near you, click here.

The First Shift’s mission is to change the way hockey is offered, to inspire new families to join our community and enroll their kids in our sport. Because we believe in all that hockey has to offer kids, their families and our communities, we designed The First Shift to break down barriers to entry by offering a program that is accessible, affordable, and most importantly, fun!

Teammate of the Month - Sport Central

RED DEER - The Hockey Alberta Foundation is proud to recognize Sport Central as its TEAMMATE of the month for June.

"With funding from the (Hockey Alberta) Foundation, over 20 different communities across northern Alberta have received needed sports equipment and support," said Sheldon Oleksyn, Executive Director of Sport Central. "In many of these communities, registrations in Minor Hockey have shot-up overnight as a result. In the rest, hundreds of low-income children without the resources to play have been able to get into the game for the first time. They confirm the fact that accessible equipment means access to the game. Equipment is a key catalyst to participation."

Sport Central was formed in Edmonton in 1991, and has since provided over 125,000 low-income families with the necessary equipment to participate in the sport of their choice.

"Funding by the Hockey Alberta Foundation has extended the reach of Sport Central’s Outreach Program," said Oleksyn. "The Program has fingers across Northern Alberta to communities requesting help to get more disadvantaged children into the game. With Hockey Alberta having connections into every community from Red Deer to the north, and the equipment needs supplied by Sport Central, a joint partnership between us has shown impressive results over the past three years! Thank you Hockey Alberta Foundation for your leadership and initiative!"

The Hockey Alberta Foundation would like to thank Sport Central for their support of the Every Kid Every Community program, and for being a great TEAMMATE!

CALGARY - Six netminders will be among the 30 attending Hockey Canada’s Program of Excellence goaltending Camp, which runs June 9-11 in Calgary.

Carter Hart (Sherwood Park), Ian Scott (Calgary), and Stuart Skinner (Edmonton) will take part at the Under-20 level, Carl Stankowski (Calgary) at the Under-18 level, while Byron Fancy (Claresholm) and Taylor Gauthier (Calgary) will attend the Under-17 development camp.

The weekend-long camp brings together some of the country’s top goaltending talent with elite-level instructors from across North America. The camp is the initial evaluation stage for summer development and selection camps in the under-17, under-18 and under-20 levels.

RED DEER - Forty-six female hockey players are now one step closer to skating for Team Alberta at the 2017 National Women’s Under 18 Championship in Quebec.

Hockey Alberta has extended invitations to 46 athletes born in 2000-2002 to compete at Team Alberta’s U18 Female Summer Development Camp, which runs July 11-16 in Camrose. The list includes six goalies, 16 defense, and 24 forwards.

“Team Alberta would like to congratulate the 46 athletes selected to attend Summer Camp in Camrose,” said Mathieu Provencher, Coordinator of Team Alberta, Female. "We’re looking forward to seeing how the players perform and compete during the week-long camp."

The 46 athletes were selected from 88 who attended the spring selection camp in Spruce Grove, which included fitness testing, mental skills preparations, on and off- ice skills sessions, and several games.

From the camp in Camrose, a shortlist will be established, with those players invited to another selection camp in the fall. Team Alberta will compete at the 2017 National Women’s Under 18 Championship November 1-5 in Quebec City.