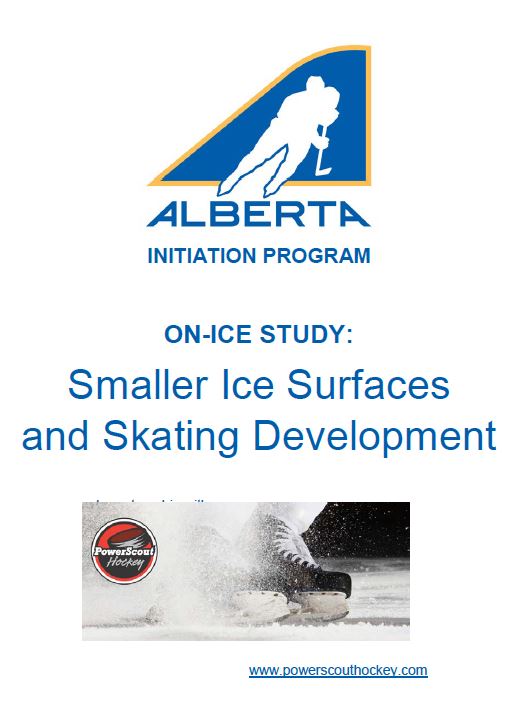 In August 2016, Hockey Alberta partnered with Powerscout Hockey and St. Albert Minor Hockey to conduct a study on the effectiveness of smaller ice surfaces in skill development. The study featured 40 Initiation-aged players (five- and six-year-olds) who participated in a series of tests to collect data on a number of game and practice scenarios.

With regard to skating development, specific data for skating speed and acceleration was collected from the following scenarios:

Overall, an analysis of the data and observation of the on-ice sessions reinforce that using a smaller ice surface at the Initiation level helps in the overall positive development of skating skills and skating acceleration for our youngest players, thereby better preparing them for when they are old enough to move to higher levels of hockey.

1. The average distance for the 5-6 year old players to reach top speed was 65 feet.

Acceleration in the 200-foot (full-ice) sprints and the full-ice games was lower than in cross-ice and half-ice games. Puck movement and availability drives the speed of play, and young players want to “get the puck”. Observation showed that the players believed they had a better opportunity to get the puck when playing on half-ice or cross-ice, which resulted in increased acceleration in pursuing the puck.

SPECIAL NOTE: When looking at overall speed of the games, full-ice games had a higher average km/h rating — 0.8 km/h higher than half-ice, and 1.5 km/h higher than cross-ice games. However, observation noted a different kind of skating taking place in the full ice game — nine players chasing the puck carrier with fewer puck touches and fewer plays being made. These observations are in keeping with findings in similar studies done by USA Hockey.

3. The average sprint speed achieved in practice is double that of the average game speed.

To help develop a player’s skating skills and to become a faster skater, the practice environment is generally more conducive than games. There is a greater opportunity to skate faster for extended periods of time in practice than in a game.